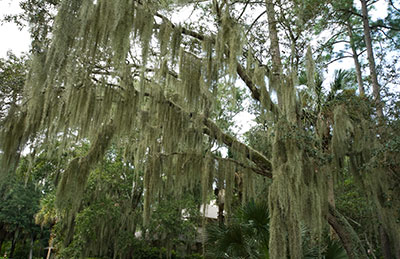 We have years of experience removing Spanish moss. If you have ever attempted to do this yourself, you know that it's not an easy task. You'll want to give us a call to stop by and have a look at the Spanish moss removal task and provide you with a free quote for removing it. This can be a hassle and worse, it could potentially be dangerous as it can also be home to things like snakes. We wouldn’t want you to have to deal with any snakes when trying to remove Spanish moss from your trees, which is why we offer Spanish moss removal.

​Another issue is that the overgrowth of Spanish Moss can cause branches to fall of the tree from the weight of the moss. This is also why we highly recommend that a certified arborist tackle the job of removing the moss. Nobody wants to be removing the moss and have the branch break of because it has been weakened by the moss.

But, all this being said, if your tree’s health isn’t looking so good and it has Spanish moss on it, the moss probably isn’t the problem. The moss doesn’t feed directly off of the tree, so it doesn’t take key nutrients from the tree directly. The moss can also store water in itself, so that if the conditions become dryer, it can survive. But saying that the moss most likely isn’t the problem is not saying that it can’t be the issue.

We will be happy to remove any Spanish moss from any trees you may have. Whether the reason is that it is becoming too rampant in the trees, or it is causing branches to fall, or that it just simply looks bad, we will accept any reason. We understand that the Spanish moss can be causing your trees or you some issues, and we believe that it should only be certified arborists who remove it. We aren’t just saying this to get the job either. It is with our complete concern for your health and the health of the tree that we highly recommend hiring professionals to get the job done for you.

We would hate it for you to have to try and remove Spanish moss by yourself without help of professionals. All the risks that are included in trying to get it out should not be in your concerns. So, if you need Spanish moss removed from your trees for any reason, give Sarasota Tree Care Services a call today.
Call: 941-203-3228